The new academic year began on Monday, September 9, 2013 with a service of intercession (moleben) after the 6 a.m. Divine Liturgy. Archimandrite Luke (Murianka), HTS rector and acting dean, and the Monastery clergy served the moleben. Recent graduate (HTS 2013) Deacon Peter Markevich, now also teaching Liturgics, also served. Before the moleben, Fr. Luke gave some brief remarks: “Today we’re just planting the seeds, but they need to be watered and cared for. This is done by going to church every day, and throughout the day, and praying, ‘God, help me.’”

Later that morning, the students gathered in the Seminary Hall at 9 o’clock for the traditional first meeting with the Rector. Fr. Luke spoke briefly about the history and purpose of the seminary, and emphasized that church life and spiritual growth were the central aspects of being a seminarian. He quoted Metropolitan Anthony (Khrapovitsky) as saying, “I don’t want to see my bishops as being administrators, I want them as men of prayer.” Following the talk, Fr. Luke blessed the incoming students to wear their cassocks and belts.

Deacon Ephraim Willmarth (HTS 2011), the seminary’s administrative assistant, then gave a presentation on the new web-based school management system called Populi, which gives a platform for administration, instructional support, financial management, and more. The new application will allow students to access their grades and communicate with professors. He also explained the usage of the students’ new Google accounts, which provide each student with an “hts.edu” e-mail address.

Finally, Hieromonk Cyprian (Alexandrou), the dean of students, then gave a few words about the spiritual life of seminarians and announced each student’s obediences for the semester. 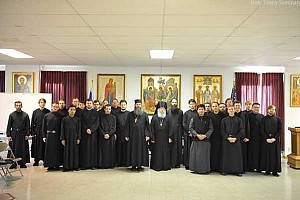