Seminary Trip to NYC to Visit Museums and Synod 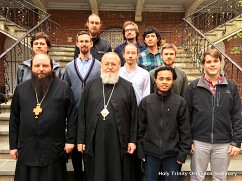 On Thursday, March 31 and Friday, April 1 a group of HTOS students travelled to New York City in order to view the Byzantine art collection at the Metropolitan Museum of Art.  The group included the seminarians enrolled in the courses of Byzantine History (B.Th. 2nd year) and Liturgical Theology (C.P.S. 2nd year), and was accompanied by Dr Vitaly Permiakov who teaches liturgical theology at the Seminary. 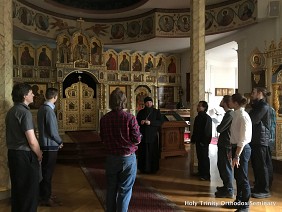 On Thursday afternoon, on the eve of their visit to the museum, the seminarians visited the Synodal Cathedral of the Icon of the Theotokos of the Sign, the residence of the Synod of Bishops of the Russian Orthodox Church Outside of Russia, where they were warmly greeted by His Grace Bishop Nicholas (Olhovsky) of Manhattan.  Vladyka Nicholas led the group on the impromptu tour of the Cathedral, showing its most prized relics and icons.  The visit continued with an informal conversation with Vladyka who asked about the seminarians’ life at Jordanville nowadays and reminisced about his own time at Holy Trinity Seminary.   As the students were leaving the Synodal residence, they were able to receive the blessing of His Eminence Hilarion, Metropolitan of Eastern America and New York, First Hierarch of the Russian Church Abroad, who joined Bishop Nicholas and the students in a group photo. 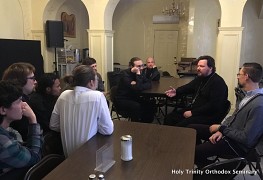 The seminary students and Dr Permiakov then proceeded to St Nicholas Cathedral (Moscow Patriarchate) on 97th Street where they were welcomed by His Grace Bishop John (Roshchin) of Naro-fominsk, Administrator of the Parishes of the Moscow Patriarchate in the U.S..  During a short tour, His Grace told the students about the history of the Cathedral, constructed by the decree and with the support of Tsar-Martyr Nicholas II and originally consecrated by St Tikhon, then – Archbishop of North America, in 1902.  Vladyka John then engaged the group in a lively discussion in the cathedral refectory, during which the students were able to ask questions concerning the life of the Patriarchal parishes in the U.S., relations between ROCOR and its Mother Church, as well as about contemporary issues facing Orthodoxy nowadays.

The first day of the visit concluded with dinner and free time, during which students were able to explore some of the sights of the city, including the World Trade Center Memorial. 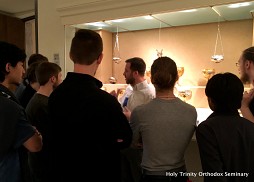 On Friday morning, following a stroll through Central Park, the Jordanville group arrived to the Metropolitan Museum of Art on 5th Avenue for the tour of the Byzantine art collection.  The tour was led by the Rev. Deacon Evan Freeman (OCA), a doctoral candidate in Byzantine Art at Yale University and a Lecturer in Liturgical Art at St Vladimir’s Seminary. The Byzantine collection at the Met houses many unique objects reflecting religious life and material culture of the Byzantine empire,  including sixth century liturgical chalices, processional crosses, censers, giving the students who study the history and the liturgy of Byzantium a glimpse of the rich liturgical life of the ancient Christian empire.  As Deacon Evan noted at the end of the tour, “our group toured the Metropolitan’s collection of Byzantine art, focusing on liturgical objects, which is among the finest in the country. Our lively discussion was enriched by the Jordanville students’ knowledge of Church history, canon law, and liturgics.” 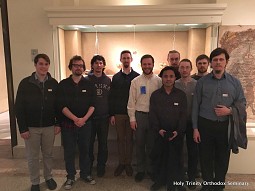 In the words of the fifth-year seminarian Stefan Stoyanov, “the Byzantine collection at the Metropolitan Museum holds one of the most interesting and diverse group of liturgical items that I have seen.  It was a joy to see these items up close with a thorough commentary by Deacon Evan.”

After the tour, the group was able to spend the rest of the day until their departure exploring other collections of the Metropolitan Museum.  For many seminarians, this was the first time when they were able to explore the Met, especially its rich collections of Egyptian, Asian, and European art. 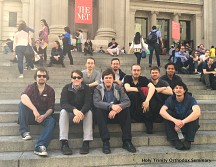 The seminarians, staff, and faculty who helped to organize and participated in this trip would like to express their thanks to our Rector, Archimandrite Luke, for his blessing and support of this endeavor.  We would like also to thank Vladyka Nicholas and Vladyka John for their generosity and hospitality in welcoming the Jordanville group during the first day of the trip.   The seminarians hope to return to the Synodal Cathedral, St Nicholas Cathedral, and to the museums of New York City for other educational trips in the future.