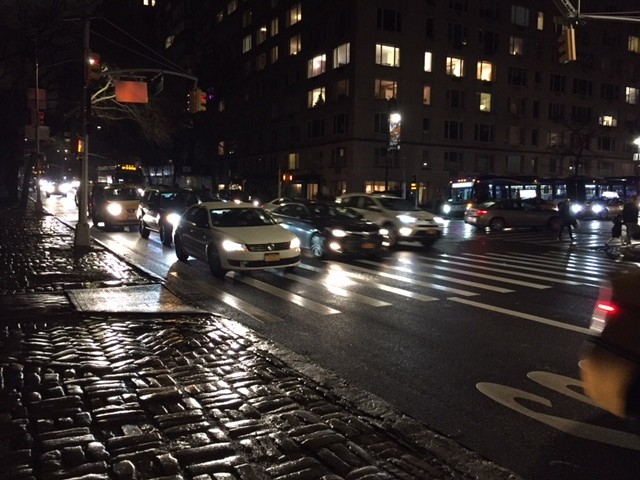 We left a dark and snowy Jordanville early in the morning to begin what would appear to the outside observer to be the most unlikeliest of journeys: one to the New York/New Jersey area to gain a greater understanding of the long history of the Russian Orthodox Church.

This field trip is part of our class History and Identity of the Russian Church Abroad offered in the Master of Divinity program at Holy Trinity Seminary.The purpose for the trip is to understand ROCOR’s relationship with the other parts originating from the Russian Orthodox Church in America and to have a glimpse of parish life in non-ROCOR communities. Our small group included two faculty, Deacon Andrei Psarev and Dr Vitaly Permiakov, and two M.Div. students – Riasophor Monk Angelos Stanway and Reader Seth Davidenko. After a drive of several hours in which we had our weekly lecture session (ROCOR and other Orthodox) while on the highway, we arrived in Garfield, New Jersey, to visit the long-established parish of the Three Saints, one of the largest parishes of the Moscow Patriarchate in the United States. Although the visit was shorter than was planned, due to a pastoral emergency, rector Archpriest George Konev showed our small party of four warm hospitality as he gave us a tour of the church and told us the history of the parish, which was founded in 1898, and features saints such as Saint Tikhon of Moscow, Saint Raphael of Brooklyn, and Saint John Kochurov of Chicago as major figures in its story.

An experienced priest, Father George imparted some of his accumulated pastoral wisdom to both faculty and seminarians and explained how a Patriarchal parish such as his would operate, allowing us to compare and contrast with the ROCOR parishes that we are more familiar with. He also informed us about the pre-kindergarten school run by the parish, which currently has around six hundred students, both Orthodox and non-Orthodox, and the community center, which has activities every day of the week. After a brisk lunch, we departed New Jersey for New York City, arriving at the ROCOR Synod of Bishops to arrange accommodation for the evening before walking to the Metropolitan Museum to fill some of our free time. Here we had the opportunity to visit the extensive Byzantine art exhibit, featuring many beautiful liturgical items and icons, as well as the new Armenian exhibit, which also featured a large number of incredible ecclesiastical artifacts from Russia’s near neighbor, as well as other pieces of traditional Armenian art. Several hours in the museum was followed by matins and the akathist to the Sweetest Lord Jesus, served at the patriarchal cathedral of Saint Nicholas in Manhattan. After a prayerful service attended by a number of clergy and parishioners, one of the most senior priests of the parish, Archpriest Alexander Golubov, former Dean of St Tikhon’s Seminary, who grew up in the ROCOR, joined our party for supper at a local restaurant, where he shared his thoughts on Russian Orthodox history in America, contemporary Orthodox life in the twenty-first century, and parish life at the Patriarchal cathedral, as well as recounting his own journey to the priesthood. A man of keen intellect and pastoral sensitivity, Father Alexander served us plenty of food for thought as we returned to the Synod to rest and prepare for the second day of our field trip.

Rising early, our group of intrepid ROCOR historians started the second day of our field trip with divine liturgy in the Synodal Cathedral of Our Lady of the Sign. Some of the students participated in the liturgical life of ROCOR’s central church by assisting on kliros with chanting and reading. Following the liturgy, the group was invited to join Bishop Nicholas of Manhattan for refreshments and conversation in his quarters. Vladyka Nicholas spoke about the daily life of a bishop, the main spiritual influences in his life as a future pastor growing up in the Russian diaspora, as well as his experience of church life in Russia. He shared his recollections of life at Jordanville as a seminarian and expressed his happiness at the new Holy Trinity Seminary master of divinity program and its progress in its first year. Vladyka also shared his thoughts on parish life, the current issues facing Orthodox priests, and passed on some of his wisdom on how Orthodox pastors should relate to their flock. Edified by Vladyka’s words, our group was able to venerate the Kursk Root Icon, the protectress of the Russian diaspora, before departing and take the blessing of the Theotokos with us for the rest of the day. After a lunch at a Manhattan eatery, we headed to the Cloisters, a part of the Metropolitan Museum near the Hudson River which is modeled on medieval Western monasteries. Feeling at home in such surroundings, we were able to take in the exhibits of medieval tapestries, furnishings, art, and treasures, as well as a large number of ecclesiastical artefacts that our on-site liturgical specialist was able to explain to us. Alas, due to the presence of museum attendants, our group’s singers were able to successfully resist the temptation to test the building’s acoustics with some troparia. Departing the museum, we made the journey to our final destination of Sea Cliff, Long Island, where we were greeted by the rector of Saint Seraphim Church, Archpriest Seraphim Gan. This church serves as a monument to the reconciliation, achieved within the Russian Church in 2007. We were able sit and speak with Father Seraphim about our studies and research into ROCOR history, and he shared with us some of his experiences in the Church Abroad as a young seminarian and priest. He then took us to the church and showed us the beautiful frescoes depicting the history of the Russian Orthodox Church, from Kiev in 988 to the reunification in 2007. Following the All-Night Vigil, we assembled at the rectory, along with parish protodeacons Father Pavel Wolkow and Father Eugene Kallaur and members of the sisterhood to taste extraordinary Russian hospitality, enjoying supper and conversations about church life, liturgical practices, seminary experiences, and ROCOR luminaries. We can say that if we learn about church history around the seminar table, then we learn about the Church’s people around the dinner table. Father Seraphim shared some thoughts about pastoral issues and the life of a priest with us before we retired to rest and prepare for Sunday’s divine liturgy.

The third day of our trip began with Sunday divine liturgy at Saint Seraphim of Sarov Church in Sea Cliff. Members of our group concelebrated, and were chanting, and reading on kliros before participating in the Holy Mysteries. We had the opportunity to witness how the parish clergy are able to use their interest in liturgical arts to enrich the divine services. Immediately after the end of the liturgy, our group drove to the OCA parish of Our Lady of Kazan, which existed in the area since 1942, prior to the formation of the ROCOR parishes at Sea Cliff and Glen Cove. We were met by the rector, Protopresbyter Leonid Kishkovsky, who shared his memories and reflections on relations between the two communities, including some very touching stories of his interactions with Bishop Mitrophan, former rector of Saint Seraphim. Despite the absence of ecclesiastical communion between OCA and ROCOR, relations were never hostile between the rectors and there was always room for dignified interaction.

Father Leonid also covered his involvement with the Russian Church and the process of gaining autocephaly for the OCA in 1969-1970, as well as encounters between the OCA and ROCOR following the reunification of the two parts of the Russian Church in 2007. In light of recent events in Ukraine and Western Europe that are close to the hearts of both ROCOR and OCA, Father Leonid shared his thoughts on the subject and stressed the importance of Eucharistic communion between the local Churches. An assisting priest of the parish, Father John Bartholomew was also in attendance and shared some of his memories of serving alongside ROCOR clergy in recent years.

Returning to Saint Seraphim after our discussion with Father Leonid, we were again hosted by Father Seraphim Gan and the sisterhood of the parish, who treated us to a delightful Sunday lunch as we continued to discuss pastoral issues, including clergy formation, character requirements for potential clergy, the mystery of confession, and how priests need to be ready to deal with unique and sometimes even dangerous situations on a potentially regular basis, such as disturbed individuals turning up at churches when the priest is alone. We also discussed contemporary events in Russian church life and the future and mission of the ROCOR. Fellowship continued for several hours, both in the parish hall and rectory, before we were forced to depart for home due to the lateness of the hour.

All things considered, this was an incredibly rewarding trip, not only for the variety of places visited and sights seen. The warm fellowship enjoyed with fellow Orthodox from the three churches originating in the historic Russian Church in America and the edifying conversations with clergy and laity gave a human face to the classroom discussions, bringing alive the multifaceted history of Russian Orthodoxy in America and helping to understand our continuing place within it.