Instructor Presents at the XXI Canon Law Congress in Bari

The Society for the Study of Canon Law of the Eastern Churches was established at the University of Vienna in 1971. It is a purely academic and non-ecclesiastical body that aims to gather into one place the academic research of those Catholics who have a special sui juris (non-Western) Canon law focus and the Eastern Orthodox. There is currently no other comparable academic conference concerning canon law. The Congress is held every two years.

The Congress took place from September 10 to 13 in Bari, Italy. This year it would have been held in Lebanon, but at the end of last year it became clear that this was not possible because of the danger from Islamists.  The participants of the congress were placed close together, giving me the opportunity to meet with a professor of University of Vienna, Dr. Eva Synek, a longstanding member and a great enthusiast of the society.

On Tuesday morning in the premises of the University of Aldo Moro the congress was opened by the greetings from Rector of the University, Dr. Corrado Petrocelli, Dean of the Faculty of Law, Professor Massimo De Rienzo, Fr. George Gallaro, and Dr. Raffaele Koppolla, and Archimandrite Nicephorus (Efstafiu), a representative of the Ecumenical Patriarchate, and Prior of the Basilica of St. Nicholas Padre Lorenzo Lorusso.

From the reports read on this day I would like to mention the paper Prof. Gaetano Damato (Faculty of Law of the University of Bari) dedicated to the dialogue between the Orthodox Church and heterodox religions in building a democratic society in Albania.

Immediately after the welcoming speeches, I went to the Basilica of St. Nicholas, where on Tuesdays at 10:30 am, the clergy of the Patriarchal dependency in Bari serve the Divine Liturgy. The way to the Basilica through the old town gives the impression of life as it was centuries ago - the people sitting in the half-open patios, talking, hanging clothes on the balconies. Inside the houses one can see home altars with carved statues of saints.

The holy relics of St. Nicholas are in the crypt under a marble sarcophagus.  The liturgy was served by the clergy pilgrims from various places (in particular from Perm). The crypt church was filled with pilgrims from Russia. The rector Archpriest Andrei Botsov was performing proskomedia and warmly greeted me.

After the service, I visited the dependency. There are two churches – the upper is dedicated to St. Nicholas and lower to St. Spiridon. The church was designed by the Russian architect A. Shchusev. I was able to visit the lower church, which throughout the Soviet period at different times, was served by12 priests of the Archdiocese of Russian Orthodox Churches in Western Europe (Ecumenical Patriarchate) and the Russian Orthodox Church Outside Russia. The church has a four-story building for pilgrims adjacent to it. Because of World War I and the subsequent Bolshevik Revolution in Russia, improvements on the pilgrimage home have only now been completed. I was impressed by how efficiently Fr. Andrei and his assistants deal with the volume of urgent matters related to the various needs of pilgrims. It was interesting to learn from the abbot Nektarios, a native of Bezhetsk, of his interest in his elder countryman – the Jordanville iconographer Archimandrite Cyprian (Pyzhov, d. 2001).

The compound was built by the Orthodox Palestinian Society, and here is seen the same "imperial model" as in Alexander's Compound in Jerusalem and the Holy Trinity Cathedral in Buenos Aires.  The ROCOR community used to worship in the lower church of St. Spyridon. After the unification, the church was transferred to the Moscow Patriarchate. The widow of a ROCOR priest, Marina Trufanova still lives there with her children.  Currently, in the lower church, services are being held by a Greek community of the Constantinople Patriarchate.

By six o'clock, after a day near St. Nicholas, I returned to the conference. The professor of Canon Law from the University of Thesaloniki, Theodore Giankou, submitted his report on the new charter of the Church of Cyprus. Interestingly, he noted the presence of ethnophyletism in it (the claim that all Cypriots, even those who were baptized abroad, belong to the Church of Cyprus).

On Wednesday, I gave my presentation.  The panel was headed by Dr. Spyridon Troyanos of Athens, a leading figure of the Orthodox Canon Law. The first report was by Dr. Irene Christinaki, Professor of Canon Law from the University of Athens and the General Counsel of the Synod of the Church of Greece, who organized the last congress in Athens and helped with this one. Her presentation focused on the recently enacted statute for the Stavropegial Monastery of St. John the Evangelist on Patmos. It is interesting to note that the abbot of the monastery holds the title of Exarch of the Patriarch of Constantinople, that the monastery is governed by a board of the elders, and that the statute’s chapter on the property is the most extensive one.

There was an interesting critical aspect in the report of the Melkite Chorbishop John Faris (Utica, New York) on the limits of the authority of the clergy of his church. The author noted the oppression of Melkites by the Western Rite Catholics until the mid-twentieth century.

This was followed by my report on the Current Laws of the Russian Orthodox Church. The report described the authoritative regulations: the Scriptures, the Byzantine canons, Kormchii and regulations of the synodal period, as well as the legislative and executive authorities. Special attention was given to the importance of the legacy of the Council of 1917-18, which is now, after the fall of communism, intensely studied within the Inter-Council Presence.

On Wednesday evening, the participants visited the Cathedral of Bari near St. Nicholas’ Basilica. The cathedral was built in the12th-13th centuries. In the crypt, the remains of ancient Christian baptistery are preserved, as well as the incorrupt relics of holy martyr Columba of the third century, and the Byzantine icon of Hodigitria from the seventh century.

On Thursday morning, I was honored to assist Archpriest Andrew Boitsov at the Divine Liturgy in the Basilica of St. Nicholas. There were clergy and pilgrims from many places including Kazan, Bryansk, Novosibirsk, and the Kiev Caves Lavra.

From the papers read that day at the conference, I would like to point out to the report of the Greek-Catholic priest Dr. Paul Luniv dedicated to the Canon Law of his church. Greek Catholics in Ukraine, in response to years of oppression during the Soviet regime, after its fall, tried to preserve and highlight the various Western practices that, after the Second Vatican Council, are not observed even by the Western-Rite Catholics.

Emanuel Tavala, Faculty of Law of the University of Sibiu in Romania, dedicated his paper to topical legal issues of the Statute of the Romanian Orthodox Church. He mentioned the problem of the vulnerability of clergy to abuse by bishops.

The report of another Romanian academic, Dr. Radu Carp was devoted to the violation of the freedom of religion by European states (he considered cases of inter-church conflicts in Moldova, Ukraine, Latvia). Interestingly, the secular court, while considering such conflicts took into account the position of canon law.

Dr. Julian Constantinescu, University of Craiova, presenting on Friday morning, dedicated to the recent sad phenomenon called a “trade union” of the clergy of the Romanian Church.

Afterward, there was a presentation of doctoral projects: David Heith-Stade (University of Lund, Sweden) is considering the Pedalion by St. Nicodemos of the Holy Mountain as an example of the Greek canon law of the 18th century, Elena Giannakopoulou from Athens University is exploring the seeming contradiction between Canon 19 of the Council of Ancyra and 60th of St. Basil the Great (about monasticism), Elisey (Heikkilä, University of Helsinki) is considering decisions on marriage law at the Russian Council of 1917-18; Patrizia Piccolo (University of Aldo Moro, Bari ) is studying Byzantine legal effects in Puglia. After that, in place of the recently-departed Greek canonist Constantine Pitsakis, the new president of the society was chosen - the titular bishop of the Patriarchate of Constantinople Cyril (Katerelos) of Abydos.

At half past four in the evening all the participants gathered at the Basilica of St. Nicholas. The director of the St. Nicholas Research Center, Dominican Gerardo Choffari, demonstrated a good command of Russian. He told us that the transfer of the relics of St. Nicholas, in comparison with other saints, has remained the most well-documented one. The names of those who stole the relics from Myra are still commemorated in Bari as heroes on the day of the translation of the relics of the saint. At the high place in the Basilica is the image is St. Nicholas donated by Uros III of Decani, the Serbian king of the14th century. Every year on the day of translation of the relics the prior of the basilica collects the myrrh from the relics, which is then diluted with holy water in the tank and given to the pilgrims. In the Basilica there is a museum, where the collected donations from pilgrims to St. Nicholas are displayed. Padre Gerardo said that now more pilgrims from Russia come to St. Nicholas than from Italy: "We do not worship St. Nicholas, but he is a street that leads to Christ." After the visit to the Basilica was the final speech of Dr. Raffaele Koppolla, professor of church law at Bari University, who highlighted the themes of the conference and their implications for the study of canon law. Then the Dominican community that ministers to the basilica held a farewell reception in the house. From the flat roof the courtyard of the basilica could be clearly seen, which, after the departure of the pilgrims, local children used for their games.

It was nice to meet personally with K.A.Maksimovich, professor of canon law from St. Tikhon's University of the Humanities, the only expert in canon law to come from Russia, and once again meet Dr. Elijah Patsavos, who for many years taught canon law in the Holy Cross Greek Orthodox School of Theology in Brookline, Massachusetts. Some of his books are used in the study of Canon Law at Holy Trinity Seminary.

Some topics that were discussed at the conference could be easily qualified as renovationist and thus dismissed along with the problems behind them.  However, this does not solve the problems, but only aggravates them.  It is no wonder that the leaders of the Russian renovationists split, for all their lack of principles exacerbated the real problems of the Russian Church with untenable and non-traditional solutions.  Participation in such conferences helps to see the inherent problems appearing in various ecclesiastical bodies and thus give additional perspective to understand the processes that are taking place in our jurisdiction of the Holy Orthodox Church. 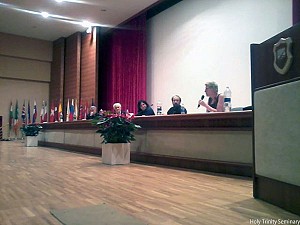