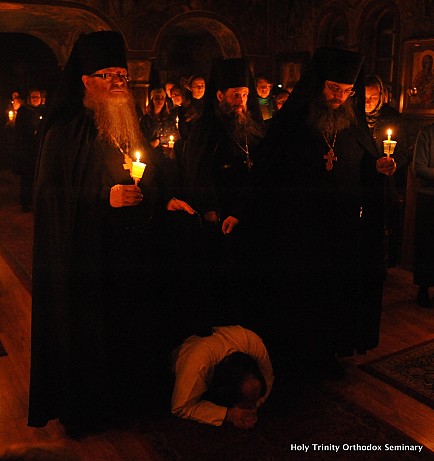 On Friday, April 4, 2014,  the prescribed matins service and akathist to the Mother of God was served in Holy Trinity Monastery, in front of an icon containing a piece of the belt of the Mother of God.  The service was presided by HTS rector and HTM abbot Archimandrite Luke,  with many guest clergy who co-served.  Immediately following the conclusion of the service, Fr. Luke performed the rite of tonsure into the lesser schema upon Priest Nicholas Olhovsky, bestowing the name Nicholas, in honor of St. Nicholas of Japan. Immediately following, Novice John (Weekes) was tonsured a Riassophore-Monk.

Fr. Nicholas is a Holy Trinity Seminary graduate  and a clergyman assigned to the Synodal Cathedral of the Mother of God of the Sign in Manhattan, NY.  Fr. Nicholas, in recent years, has been the guardian of the beloved Kursk-Root Icon of the Mother of God.  By a decision of the ROCOR Synod of Bishops, and having been approved by Patriarch Kyrill, Fr. Nicholas has been elected to be the next Bishop of Manhattan, vicar of the Eastern American Diocese of ROCOR.