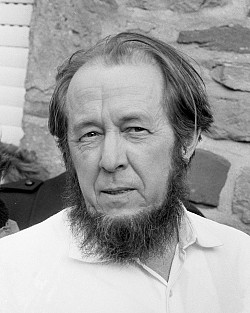 On Thursday, October 27th, 2016, Dr Alexis Klimoff, Emeritus Professor of Russian Studies, Vassar College, and one of the foremost experts on Alexander Solzhenitsyn, delivered an illustrated lecture titled "Aleksandr Solzhenitsyn: Overview of Life, Works and Influence" in the seminary hall.

Dr. Klimoff portrayed the life of Solzhenitsyn and his works in that context.  Of particular mention was how his work "A Day in the Life of Ivan Denisovich," which gave a vivid illustration of life in Stalinist prison labor camps, was actually published in the Soviet Union with the express approval of Communist Party Secretary Nikita Krushchev.  The lecture was recorded and is now available for viewing.