Deaconesses Past, Present, and Future - A Public Lecture by Pdn. Patrick Mitchell 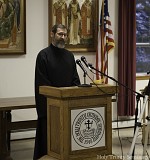 Some Orthodox Christians today are trying to re-institute the ancient Church order of “deaconess,” despite the uneven history of that female office in the Church, as well as that of the male diaconate.

In an informative and provocative lecture at the Seminary on Monday, October 23, Protodeacon Patrick Mitchell approached the subject of deaconesses in several ways.  First, he surveyed and compared the Church’s historical experience of male deacons and female deaconesses. Second, he discussed the consecration of six women as deaconesses in sub-Sahara Africa by Patriarchate Theodoros II of Alexandria last February.  Third, Protodeacon Patrick considered the implications of such a restoration for the Church at large.

In a well-researched and persuasive presentation, Protodeacon Patrick concluded that male deacons and female “deacons” were never the same order, that the female order was inherently problematic for the Church because it appeared to elevate women over men, and that the “ordination” of women as deaconesses made less and less sense as the Church’s understanding of holy orders evolved.

Protodeacon Patrick concluded his remarks by suggesting that the Church reexamine its apologetic language concerning the role of men and women in the Church and revive it in our increasingly secular, even pagan contemporary era.

Protodeacon Patrick Mitchell is a former Washington Bureau Chief of Investor’s Business Daily, the author of four books on politics and religion, and a contributor of chapters to four other books on foreign policy, international banking, and American history. He has also appeared on many radio and television shows including ABC’s Nightline and Face the Nation, CBS’s Evening News, NBC’s Today, and CNN’s Crossfire and Larry King Live.

Protodeacon Patrick served seven years in the United States Army as an infantry and counterintelligence officer. He was received into the Orthodox Church with his family in 1990 by our own Dean, Archpriest Alexander F.C. Webster, at the Protection of the Holy Mother of God OCA parish in Falls Church, VA, and was ordained to the diaconate by the OCA’s Metropolitan Herman in 2007. He was released to ROCOR in 2013 and is now attached to St. John the Baptist Russian Orthodox Cathedral in Washington, DC, where he has served since 2012.

Protodeacon Patrick recently earned the degree of Master of Theology in Orthodox Studies with Distinction from the University of Winchester in England, where he is currently a doctoral student under Fr. Andreas Andreopoulos. His master’s thesis was titled “The Disappearing Deaconess: How the Hierarchical Ordering of Church Offices Doomed the Female Diaconate.” He spoke on that subject at a conference in California in early October sponsored by the St. Phoebe Center for the Deaconess.