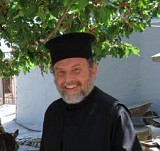 Holy Trinity Orthodox Seminary's 2018 commencement will take place on the Sunday of All Saints, June 3. The day will begin at 9am with the entrance of His Grace, Bishop Jerome, followed by a Hierarchal Divine Liturgy and lunch in the trapeza. Commencement will begin at 2 pm with a procession to the monastery cathedral for a molebien of thanksgiving  followed by the formal academic procession to the main hall in the Dean Nicholas N Alexandrov Seminary Building. There the Commencement exercises will proceed with Reverend Fr. Patrick Viscuso, Ph.D., as the Commencement speaker.

Father Patrick Viscuso is a Professor of Canon Law at the Antiochian House of Studies, an Orthodox canonist, and a priest of the Greek Orthodox Archdiocese of America.  His doctorate in historical theology from The Catholic University of America concentrated on Byzantine and Eastern canon law, patristic studies, and church history.  He also holds a Master of Divinity degree from Holy Cross Greek Orthodox School of Theology and a Bachelor of Science in Foreign Service from the Edmund A. Walsh School of Foreign Service, Georgetown University.  He is the author of numerous scholarly articles and five books: A Quest for Reform of the Orthodox Church (2006), Orthodox Canon Law: a Casebook for Study (2007, 2011 2ndedition), Sexuality, Marriage, and Celibacy in Byzantine Law: the Alphabetical Collection of Matthew Blastares (2008), Guide for a Church under Islam, The Sixty-Six Canonical Questions Attributed to Theodoros Balsamon (2014), and The True Significance of Sacred Tradition and Its Great Worth by St. Raphael Hawaweeny, A Nineteenth-Century Orthodox Response to Roman Catholic and Protestant Missionaries in the East (2017).  Father Patrick has spoken at a number of domestic and international venues, most notably the Dumbarton Oaks Spring Symposium and the North American Patristic Society.  He has been president of the Byzantine Studies Association of North America.

A reception for all those in attendance will follow the Commencement exercises immediately in Seminary Hall.  The Seminary community invites all of our alumni, supporters, and friends to join us for what promises to be an exciting day.