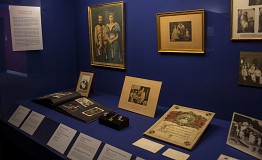 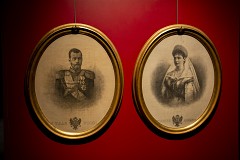 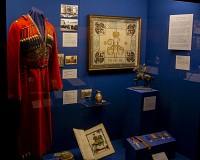 On the night of July 17, 1918, Nicholas II, his wife Alexandra Feodorovna, their five children, and four loyal attendants were led to the basement of the Ipatiev House in Ekaterinburg. There they were brutally murdered by their Bolshevik captors. "Last Days of the Last Tsar" narrates the events leading up to that grim finale and portrays the family whose life and tragic fate have fascinated the world for a century. This is the first exhibition in North America dedicated exclusively to the final months of the Royal Martyrs.

Drawn from the rich museum, archival, and library collections of the Russian History Foundation, the exhibition highlights the unique objects and documents collected by Nikolai Sokolov during the 1918-1919 investigation of the imperial family’s murder. The Foundation’s artifacts are supplemented by loans from a dozen U.S. collections, ranging from splendid coronation gifts and luxurious objets d’art by Fabergé to modest personal effects found during Sokolov’s investigation. Having been dispersed for a century, those item are brought together, many of them displayed for the first time.

Interested in visiting in person? Plan your visit here: www.russianhistoryfoundation.org.

“We had a fantastic visit to this gem of a museum! The exhibit was moving, very well organized, and featured a wide array of unique objects.”

“It's very refreshing to see a historical exhibit done with such care for the soul.”

“The presentation is objective, historical and extremely accessible. It was a very worthwhile visit.”