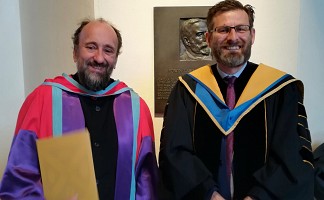 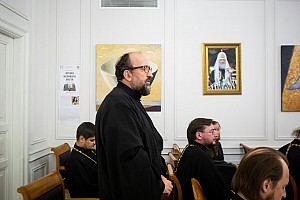 From June 18th to the 19th, 2019 Deacon Andrei Psarev, Associate Professor of Canon Law and Russian Church History at Holy Trinity Orthodox Seminary in Jordanville, participated in two sessions of the Inter-Council Assembly held in Moscow. An Inter-Council Assembly was founded in 2009 to develop position papers on a wide range of topics from the participation of the faithful in the Eucharist to the sanctity of human life from the moment of conception.

On June 18, Deacon Andrei took part in the work of the Commission on Theology and Theological education, which was held in the Church Institute of Graduate and Postgraduate Studies, chaired by Metropolitan Hilarion of Volokolamsk. Members of the commission responsible for document drafting gave reports on their progress expressing church teaching on Orthodox understanding of the causes of terrorism and extremism, the veneration of holy relics in the Orthodox Church and studying the practices of modern exorcism.

On June 19, Deacon Andrei took part in the work of the Commission on Church Law, chaired by Archbishop Mark of Berlin and Germany. The Moscow Sretenskii Monastery once again showed outstanding hospitality to the commission. The members discussed the revised version of the document “The Blessing of Orthodox Christians for Military Service”. Commission members reiterated their recommendation to abandon the practice of sanctifying non-personal military weapons, including weapons of mass destruction.

On Sunday, June 24, Deacon Andrei gave a presentation at the parish in Brusov Lane of the church named after the Re-consecration of the Resurrection basilica in Jerusalem: “The History of the Russian Church Abroad in Portraits of its Faithful Servants.” The clergy and numerous parishioners warmly received this talk offered by a speaker well-known to them.

Then on June 27 Deacon Andrei arrived in Queen's University, Belfast, Northern Ireland to complete the research on Canon 15 of the First and Second Council (861) that he began in 2009. In the letter from the university of May 2, 2019, Deacon Andrei was informed that he met all the criteria set out in the Study Regulations for Research Degree Programs and accordingly, his name was published as qualified for the degree of Doctor of Philosophy. At the ceremony on June 28 Deacon Andrei was the last of the cohort of graduates associated with the Institute of Byzantine Studies, which was closed in 2009, but still represented by Psarev’s supervisor Dr. Dion Smythe, until his departure from Queen’s in 2015.