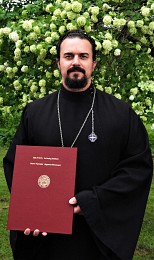 Fr. Daniel received academic scholarships for each of his three semesters at Holy Trinity Seminary. On Friday, May 29, 2020, he successfully defended his thesis entitled “Original Sin: A Challenge to Contemporary Orthodox Views from an Historical Perspective”.  Substantial interest was expressed by a good number of scholars, who were present at this premier public event via the internet.

His Grace Bishop Luke, Rector, and Dr. Nicolas Schidlovsky, HTOS Dean, together with distinguished members of the board of trustees, the administration, and the student body, congratulate Fr. Daniel and his family on this occasion. Much gratitude is also due to the faculty of the Seminary itself, whose members have been so important during these formative academic years for Fr. Daniel. We would also like to acknowledge The Orthodox Pastoral School of Chicago, ROCOR’s Fund for Assistance, The Lukianov Family Foundation, the Col. George Codrea USMC Memorial Scholarship, and the St. Seraphim Scholarship.  All of these organizations and their numerous benefactors have made this possible. 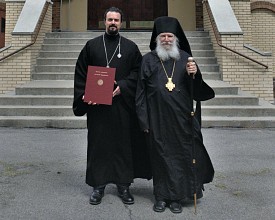 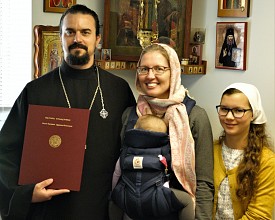 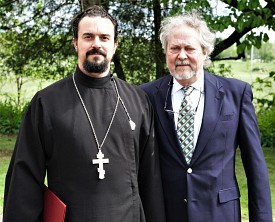 Fr. Daniel was born and raised in Southern California. He attended a Lutheran grade school and graduated from an all-boys Roman Catholic high school where he was a varsity athlete.

He enlisted in the United States Marine Corps in 2003 and several years later, was accepted into a commissioning program whereby the Marine Corps permitted him to attend college full-time while remaining on active duty.  Upon completion of the bachelor’s degree, he was commissioned, and following the typical officer career path, he attended The Citadel in Charleston, SC, during which time he met and married his wife, Matushka Macrina.

After completing the requisite officer training in Quantico, VA, Fr. Daniel and family were stationed in Okinawa, Japan for three years.  It was during this time that Fr. Daniel first learned about the Orthodox Church.  After private study, he sought out the Orthodox chaplain (Fr. Christopher Allen) who was also stationed in Okinawa. He and his family began attending services regularly, and after a nine-month catechumenate, he, his wife, and daughter Melania were baptized and chrismated.

In 2013, they moved from Okinawa to Hendersonville, NC, and began attending the local ROCOR parish.  In the fall of 2014, he was tonsured a reader and ordained a subdeacon on the same day by His Eminence, Archbishop Gabriel of Montreal.

Fr. Daniel then began attending the online Orthodox Pastoral School of the Diocese of Chicago and Mid-America, and was assisted financially during this program by ROCOR’s Fund for Assistance (FFA).

In August of 2015, the Franzens moved to San Antonio, TX., and began attending Sts. Joachim and Anna Orthodox Church (ROCOR) where his godfather, Priest Christopher Allen, is the rector. During those years, Fr. Daniel served at the divine services, and also acted as a catechist for the many inquirers and catechumens that attended the parish. He completed the program of the Pastoral School of Chicago in June of 2017.

Fr. Daniel was ordained to the diaconate on January 1st, 2017 by Archbishop Peter of Chicago.  Two weeks later, he had the privilege of flying to Ukraine and being the personal guest of Metropolitan Philip of Poltava and Mirgorod. Upon graduation from the Pastoral School in June of 2017,  he was ordained to the holy priesthood at the Cathedral of the Protection of the Mother of God in Chicago by His Eminence, Metropolitan Philip of Poltava, who was visiting from Ukraine.

In the summer of 2017, with the blessing of His Eminence, Archbishop Peter, Fr. Daniel moved with his family to South Canaan, PA, to begin the Master of Divinity program at St. Tikhon’s Seminary.  During his time there, he celebrated the divine services at St. Tikhon’s Monastery, as well as St. John the Baptist Cathedral in Mayfield, PA.  Having completed the fall semester in 2018, he was given a blessing to transfer into the newly established M.Div. program at Holy Trinity Orthodox Seminary in Jordanville.

While in Jordanville, he and his family fully embraced the liturgical life of the monastery.  Fr. Daniel served the divine services in rotation with the monastic clergy, as well as at St. John of Kronstadt Memorial Church in Utica, NY.  In the summer of 2019, he performed the duties of a pastoral counselor both at Jordanville’s Summer Youth Program and at St. Seraphim Camp in the Poconos. This past November 2019, Fr. Daniel, Matushka Macrina, and Melania joyously welcomed the birth of a second child, Bridget.