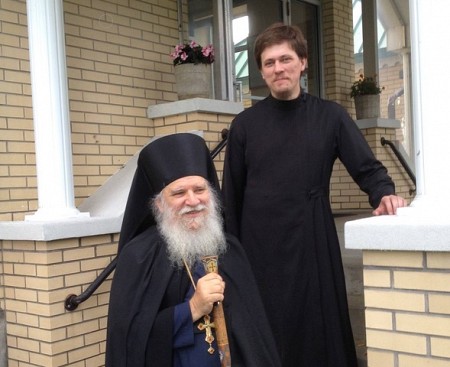 It is with deep respect and admiration that Holy Trinity Seminary acknowledges the transfer of an esteemed and beloved colleague to St. Vladimir’s Orthodox Theological Seminary this last fall.

“Since his arrival in 2011” writes Dean Nicolas Schidlovsky, “Dr. Permiakov has been a wonderful asset to Jordanville. His gentle persona, inspiring erudition, and outstanding scholarship are intricately woven into an educator’s craft that is deeply valued by all students. Our seminary enthusiastically wishes him the very best. We will always continue as devoted colleagues in line with the ‘pedagogical vision’ that Permiakov has so superbly shared with us.”

Over the years, Professor Permiakov’s tenure at Jordanville has been instrumental in many things. Immediately following his Ph.D. under Rev. Dr. Maxwell E. Johnson at the University of Notre Dame, his selfless contribution began not only as an educator, but also as an insightful and energetic administrator participating in many facets of the Seminary’s life including the church services, its professional conferences, and related extracurricular undertakings. His love of the spiritual discipline  always went hand in hand with his classroom and seminar instruction—most notably, of course, in the area of liturgics and liturgical theology. At various times, he also took up the podium with his expertise in Apologetics, Comparative Religion, Dogmatic and Sacramental Theology, Christology, and Scripture.

Until his departure earlier in 2020, Permiakov continued as a key initiator and director of Holy Trinity Seminary’s evolving M.Div program, which he helped to launch and accredit in 2018. Over the years, his on-going input was also deeply appreciated on the Seminary’s Faculty Council where he always brought keen insight frequently resulting in groundbreaking institutional policies and procedures.

As he returns to teach at his alma mater (St. Vladimir’s Orthodox Seminary, M.Div. 2004), we can recall the historical pathways that bind our seminaries. It was in 1938, on the occasion of the 950th anniversary of the baptism of Rus’, that Archbishop Vitaly (Maksimenko +1960) of Jersey City founded a memorial church dedicated to St. Vladimir in Jackson, NJ—a vision of the unity he saw between Orthodox people, especially of Slavic background. The cornerstone founding of St. Vladimir’s Seminary during the same year in nearby New York was then followed by Vladyka Vitaly’s launch of Holy Trinity Seminary in Jordanville a decade later.

Everyone in Jordanville knew that “Dr. Vitaly” (as most students used to call him) was especially compelling on each occasion of his remarkable sermons during which he would highlight the peculiarities and practicalities of “the Orthodox liturgical ethos” as rooted in “Christ crucified” (1 Cor. 1:23) and the revelation of Christ’s divinity within what he always asserted as the dialectical outcome of the remarkable balance struck between “Athens” and “Jerusalem.”