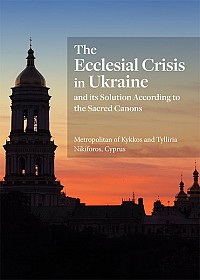 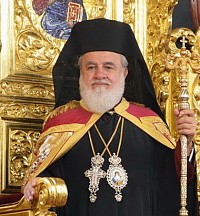 Holy Trinity Publications is pleased to announce its forthcoming publication of the first detailed examination in English of the challenges to Orthodox ecclesiology that have arisen following the intervention of the Ecumenical Patriarchate in the affairs of the Ukrainian Church in 2018. The Ecclesial Crisis in Ukraine and its Solution According to the Sacred Canons will be published on July 1st, 2021, under the Holy Trinity Seminary Press imprint.

The author of this important work is His Eminence Metropolitan Nikiforos of Kykkos and Tillyria, a senior and widely respected bishop of the Church of Cyprus and abbot of the renowned monastery of the Virgin of Kykkos founded in the eleventh century. His Eminence’s work, first published in Greek in 2020, provides a sober examination of the crisis facing the Ukrainian Orthodox Church, grounded in Holy Tradition and the Sacred Canons. It is essential reading for all Orthodox believers who want to more fully grasp what the Ukrainian ecclesial crisis means for the future of their Church. It will also assist others to see beyond the characterization of this crisis as a political event in the context of relations between Russia and the West. It makes clear that at the  heart of this conflict  is an ecclesiological dispute requiring a conciliar solution. Accordingly, Metropolitan Nikiforos writes with deep respect and honor for the venerable Ecumenical Patriarchate of Constantinople. A full description, table of contents, and bibliographical details may be found at the publisher’s website.

Metropolitan Nikiforos was elected as Abbot of the Kykkos monastery in 1983 and consecrated a Bishop in 2002. In 2001, the Municipality of Athens bestowed on him its highest distinction, the Golden Key to the City, in recognition of his ecclesiastical, social and cultural work. He has also been awarded Honorary Doctorates from the Department of Pastoral and Social Theology of the Aristotle University Of Thessaloniki and the Department of Social Theology of the University of Athens.

The Ecclesial Crisis in Ukraine and its Solution According to the Sacred Canons is available to pre-order now at:

Listings at other retailers are still populating, but this important work will soon be available worldwide, wherever books are sold.

Holy Trinity Publications makes known the millenium-long heritage of Orthodox Russia by publishing and disseminating books and journals. Through its utilization of technology and its integration with the worldwide book trade, we help to make the eternal truth of the Faith accessible and comprehensible to all.

Adhering to the highest standards, Holy Trinity Seminary Press publishes Orthodox scholarship for edification featuring studies relating to the theology, history, and liturgy of the Orthodox Church. As part of Holy Trinity Orthodox Seminary's mission of pastoral formation, the Press develops content aimed at both educating the mind and enlightening the spirit.