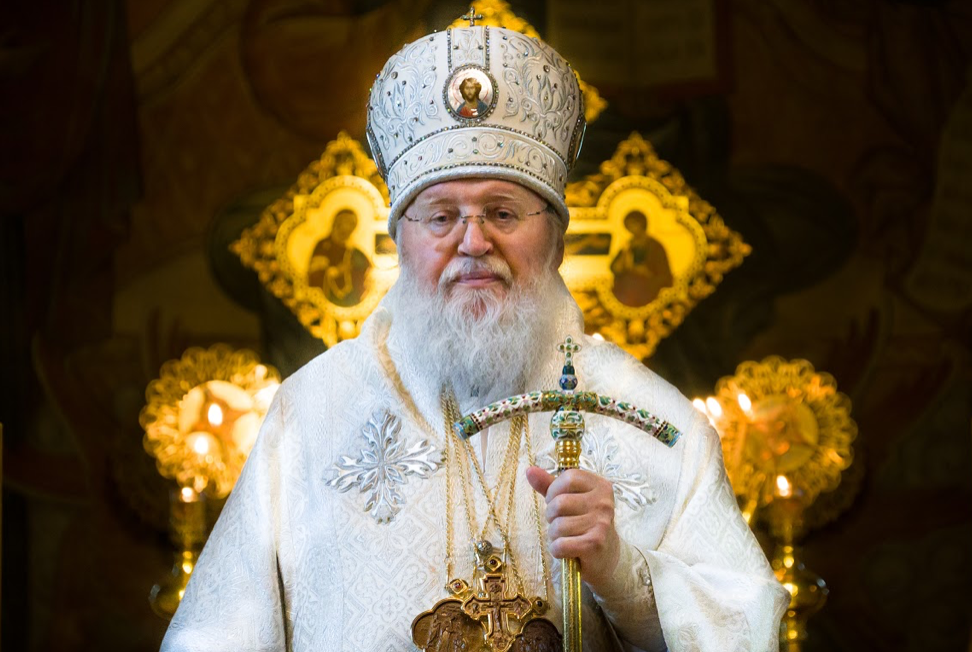 UPDATE:  The Synod of Bishops of the Russian Orthodox Church Outside of Russia met in a special session on Tuesday, May 4/17, and announced that a Hierarchical Divine Liturgy will be served on Saturday, 8/21 May, at 7:30am, at the Synodal Cathedral of Our Lady “of the Sign,” followed by a monastic funeral at 10:30am (white vestments). The burial shall be performed the following day on Sunday, 9/22 May at 3:00pm at Holy Trinity Monastery in Jordanville, NY.

Christ is Risen! It is with heavy hearts that we share the news of the Falling Asleep in the Lord of our beloved First Hierarch and ruling bishop of the EAD, His Eminence, Metropolitan HILARION. May Vladyka Hilarion's Memory be Eternal!

Metropolitan Hilarion of Eastern America and New York was the sixth First Hierarch of the Russian Orthodox Church Outside of Russia.

Metropolitan Hilarion’s parents — his father Alexei Kapral and his mother Euphrosynia (née Kasyaniuk) — were from the village of Obenizha in Volyhn, Ukraine. In 1929, during the Polish occupation, the local populace was persecuted and oppressed by Poles attempting to turn Western Ukraine into a Polish province. Thus, the 19-year-old Alexei and his young wife decided to emigrate to Canada . At the time, the Canadian government afforded immigrants the opportunity to obtain large tracts of land in Western Canada; it was there that the young family settled. Upon their arrival in the province of Alberta , the Kapral family received 160 acres of untilled land, as well as $100 in cash, a hammer, and an axe, with which to build themselves a home. In the developing Spirit River region, there were some 200 Ukrainians, and in view of the oncoming cold, they quickly built themselves houses. The great economic crisis of 1929–1930 affected the settlers as well, making an already hard life even more difficult. To find work, Alexei Kapral had to travel far from home, and he earned but 25 cents per day. Nonetheless, the family grew ever larger — five boys and two girls filled the house with children’s voices, speaking Ukrainian at home. Their parents also spoke Russian and Polish. The youngest member of the family was Igor, the future Metropolitan Hilarion. He was born on January 6, 1948, in Spirit River , and spent his childhood in the country. He had to walk over 3 miles to school every day. Later he transferred to another school in Blueberry Creek, but returned to finish high school. In 1966, he found a spiritual director, the Right Reverend Sava (Saracevic), Bishop of Edmonton, a Serb who greatly revered our Holy Hierarch St. John (Maximovitch, +1966).

From his youth, Igor felt drawn to the Church, and loved to read books and periodicals on religion and morals. In 1967, when Igor Kapral was 19 years old, he entered Holy Trinity Theological Seminary in Jordanville, NY. Upon graduating from the seminary in 1972, Igor entered Holy Trinity Monastery as a novice [lit.: poslushnik, one under obedience]. On December 2, 1974, he was tonsured a riassaphore monk with the name Hilarion, in honor of the Venerable Schema-monk Hilarion of the Kiev Caves, the famous Metropolitan of Kiev. On December 4, 1975, Archbishop Averky (Taushev, +1976), for whom the future Vladyka served as a cell-attendant, ordained him a hierodeacon. In 1976, Bishop Laurus of Manhattan ordained him a hieromonk. The same year, Fr. Hilarion received a Master’s degree in Slavic Studies and Russian Literature from Syracuse University. The future Vladyka worked simultaneously as editor of the English-language version of the magazine Orthodox Life, and as a typesetter for the Monastery press.

On December 10, 1984, His Eminence Metropolitan Philaret (Voznesensky, +1985) and nine other bishops officiated at the consecration of Hieromonk Hilarion to the episcopacy. As Bishop of Manhattan, Vladyka Hilarion was also responsible for the parishes of Pennsylvania and was appointed the Deputy Secretary of the Synod of Bishops by the Council of Bishops. Ten years later, thanks to the archpastoral efforts of Bishop Hilarion, the number of parishes in the Eastern American Diocese grew to 64. Visiting parish after parish, Vladyka drew the love and respect of all those who met him. Holding a position of responsibility in the administrative center of the Church Abroad, Vladyka Hilaron was also an active participant in the main events of its history. In 1995, Bishop Hilarion was given the title Bishop of Washington even as he continued to live in New York, but due to problems in the Diocese of Australia and New Zealand after the retirement of the ailing Archbishop Paul (Pavlov), and in recognition of his exceptional pastoral talents, Vladyka Hilarion was elevated to the rank of Archbishop and appointed ruling bishop of the Diocese of Sydney, Australia and New Zealand.

In 2003, Vladyka Hilarion was awarded the right to wear the diamond cross. During the Council of Bishops of the Russian Orthodox Church Outside of Russia in 2006, he was appointed First Deputy President of the Synod of Bishops. In 2008, following the repose of His Eminence Metropolitan Laurus, Archbishop Hilarion was elected First Hierarch of the Russian Orthodox Church Outside of Russia and Metropolitan of Eastern America and New York, a post he filled while continuing to be Ruling Bishop of the Diocese of Australia and New Zealand.

After Compline on 5/16, the first Pannikhida was served for Metropolitan Hilarion at Holy Trinity Monastery presided by HTM Abbott, Bishop Luke. Bishop Luke asked for everyone gathered to pray for the repose of our beloved Metropolitan who was not only a member of the brotherhood but a caring and accesible ruling Hierarch who always showed interest in the life of the monastery, seminary and convents. He was a tireless shepherd giving his time to answer the many requests from different people and often staying up very late at night being on the phone with people to help them. The pannikhida was served in an atmosphere of sober sorrow but also hope in the Resurrection that God would grant His servant eternal rest to where the righteous repose.