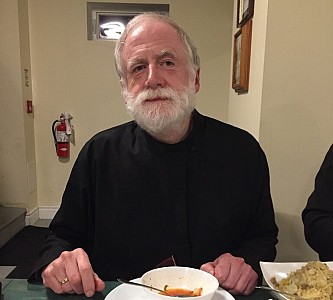 Memory is eternal to Protodeacon Christopher Birchall, who passed away in Vancouver, BC, on August 20, 2022.

Fr. Christopher grew up in England and went to St. Peter’s college in Westminster. He was among the pioneer generation of English converts to Orthodoxy who joined the Russian Church in Exile after World War Two. He was received into Orthodoxy in Jerusalem in August 1969. In 1975 he graduated from Holy Trinity Orthodox Seminary in Jordanville, NY. Fr Christopher participated in the life of the Dormition Cathedral parish in London in the 1970s and 1980s before moving to Canada with his late wife Pavla (Ruth) and their two daughters, Anna and Elisabeth.

In 1982, Holy Transfiguration Monastery in Brookline, MA, published his translation of the Life of St. Maximos the Confessor (“Dedicated to all the clergy, monastics, and laity who in this hemisphere have withdrawn from communion with those hierarchs and churches which have espoused the heresy of ecumenism”). Holy Trinity Monastery in Jordanville published his translation of Metropolitan Antonii’s “Confession” and, finally, Fr. Christopher’s encyclopedia of Russian Orthodoxy in England: Embassy, emigrants and Englishmen: the three-hundred-year history of a Russian Orthodox Church in London.

When in 2001, the ruling hierarch of the Canadian Diocese Metropolitan Vitaly (Oustinoff) refused to recognize the election of the new metropolitan, the ROCOR governed the Diocese from New York and San Francisco. Fr. Christopher restored the diocesan periodical publication (The Messenger of the Canadian Diocese), where he shared articles in Russian and English (in his translations) explaining the position of the ROCOR episcopate.

Fr. Christopher was a member of an auditing committee of the Canadian Diocese of the Russian Church Abroad. Knowing Fr. Christopher’s circumstances, he has been an example for me of a faithful servant (Rev. 10:2).