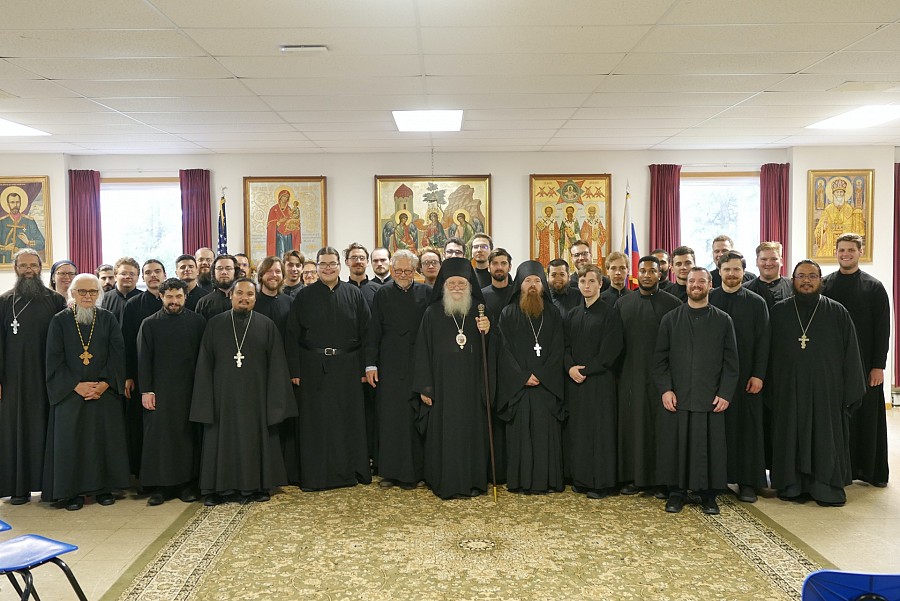 Orientation for the new students had taken place on Thursday, September 1 and Friday, Sept. 2. On Monday, September 5, at 2:00 pm, a Moleben was served by the seminary rector, His Grace, Bishop Luke, together with monastery clergy.

The 6th annual convocation followed, beginning with His Grace, Bishop Luke meeting with the faculty and the entire student body.  Vladyka’s opening remarks included sound advice as always. Among many other things, Vladyka Luke addressed the fact that each new student is here as a result of making the important choice to apply to, and attend seminary. As in past years, Vladyka again stressed that this blessing carries a great responsibility, stating that once the students put on the cassock, their behavior, actions, and remarks are all a reflection on Holy Trinity Seminary, and that this needs to be considered at all times, including when they are off campus, and to always comport themselves properly.

In addition, His Grace stated that these formational years will bring blessings, as well as temptations, the latter of which may include an unhealthy preoccupation with media in general, and particularly of over-indulging in social media.  Vladyka suggested eliminating, or at least minimizing their daily exposure to these temptations during their time in seminary, and strongly encouraged cultivating the habit of prayer, as well as that of reading. His Grace stressed that if consistent prayer and consistent reading (of actual books as opposed to reading from electronic devices) are good habits that are developed while in seminary, the students will realize that they cannot live without this, and these will remain healthy habits throughout their lives.

Welcome and introductory remarks were also then given by seminary Dean Nicolas Schidlovsky. Dean Nicolas spoke regarding the many positive developments at HTS in the recent years, including changes and updates to the curriculum, and the vetting of a new accrediting body for the seminary.  Dean Nicolas told the students to leave their concern about politics behind, and to focus instead on growing spiritually and intellectually while in seminary. The dean also acknowledged the addition of two new faculty members, both of  whom are also recent graduates of Holy Trinity Seminary.

Priest Daniel Franzen, M.Div. class ’20, has returned to Jordanville, together with his family, and takes on the responsibilities of the Instructor of Church History and Dogmatic Theology, as well as to serve in the role of staff associate to assist the dean’s office with administrative duties. Hieromonk Theodore (Stanway), B.Th. class ’17 and M.Div. ’21, remains in the role of Deputy Dean of Students, and has now also joined the seminary faculty as the Instructor of Theology.

The seminary is fortunate that, in addition to Fr. Daniel and Fr. Theodore, Archpriest Alexander F.C. Webster, Dean of the Seminary and Professor of Moral Theology Emeritus, has agreed to be ‘called back to active duty’ (in his own words), and will once again be teaching Moral Theology for the 2022-23 academic year.

Each new student was given an opportunity to introduce themselves, and if they chose, to speak a bit about themselves and tell what home parish they hail from.

At this point in the program, a blessing was given by Bishop Luke to all new students to wear the cassock, which includes the wearing of belts by the undergraduate students.

Tuesday, September 6 marked the first day of classes. On Thursday, Sept 8 at 4:00 pm, a job fair is planned, at which each department head will speak about opportunities for the undergraduate students to consider a variety of optional ‘work-study’ jobs, by which students can earn up to a $1,000.00 credit per semester, applied as a discount to their room and board fees. This program is in addition to the usual shared obediences.

Glory to God for a successful beginning of another academic year at the seminary.