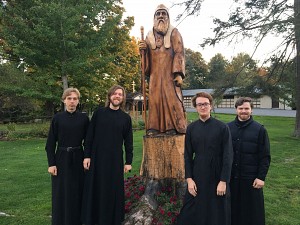 On Friday evening, an akathist was served to all North American saints, and students heard a brief sermon from the Dean of St. Tikhon's, Fr. John Parker. That evening, Dn. Michael presented a paper he wrote on the life of St. Tikhon of Moscow. Students attended Divine Liturgy in the Monastery cathedral the following morning, and enjoyed time touring the monastery grounds after Church.

In the afternoon, edifying talks were given on recent saints that labored in America. First, Fr. Patrick Viscuso, professor of Canon Law at Antiochian House of Studies and the Pastoral School of the Diocese of Chicago and Mid-America, spoke about the education of St. Raphael of Brooklyn at Halki Seminary during the onslaught of Protestant and Catholic missionaries to the Arab Orthodox Christians in the 19th century. After lunch, Fr. Serge Kotar, a former cleric of the Joy of All Who Sorrow Cathedral in San Francisco, and current Pastoral Theology professor at Holy Trinity Orthodox Seminary, spoke about the early life of St. John Maximovitch, as well as the many miracles he has worked.

That evening, students attended the All-Night Vigil in the monastery cathedral, and afterwards enjoyed fellowship over a meal prepared by the students of St. Tikhon's. Finally, all the students assembled in church on Sunday to celebrate the memory of St. Tikhon, Patriarch of Moscow and all Russia. All departed with new perspectives and friendships with their fellow churchmen struggling in their labors for Christ in their respective seminaries. There was discussion of the location for the next meeting in the Fall 2023, including the possibility of Holy Trinity Seminary in Jordanville.