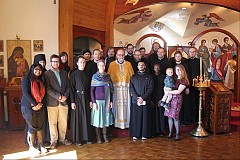 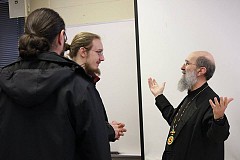 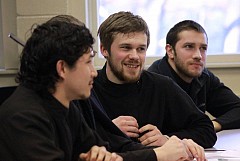 On the weekend of February 26-28, 2016, six seminarians from Holy Trinity Orthodox Seminary attended and participated in the Spring OISM (Orthodox Inter-Seminary Movement) gathering hosted by St. Vladimir's Orthodox Theological Seminary in Yonkers, NY. This conference is held to assist in OISM’s goal of closer relations between the Orthodox seminaries in North America, leading to stronger dialogue and fellowship between the seminarians of the Orthodox Church. The conference officially got under way on Saturday, February 27, when representatives from Holy Trinity, St. Vladimir’s, Saint Tikhon’s Orthodox Theological Seminary, and the Holy Cross Greek Orthodox School of Theology/Hellenic College celebrated a Moleben asking the assistance of the Holy Spirit in the conference. The representatives were given a tour of the St. Vladimir’s campus, then assembled in Metropolitan Anthony Bashir Auditorium to listen to the talks given by Archpriest Vladimir and Matushka Suzanne Aleandro on their missionary work in Kenya, followed by a talk on the necessity of missionary outreach by Archpriest Chad Hatfield, Chancellor of St. Vladimir's Seminary.

That afternoon, the representatives of the seminaries gathered for their bi-annual meeting, where a number of administrative issues were addressed. Among the decisions at this meeting was the election of HTOS student Christian Watts (2nd year) as President of OISM, as well as the selection of Joseph Nguyentan (2nd year) as HTOS representative on the OISM Board. The participants attended Vigil that evening, as well as Hierarchical Divine Liturgy Sunday morning presided by Archbishop  Irénée of Ottawa and Canada (OCA), a former member of the brotherhood of Holy Trinity Monastery.  During the liturgy, Archbishop performed the ordination of SVS seminarian Deacon Tikhon Bishop to the holy priesthood. The conference concluded after the liturgy.

Special thanks is due to St. Vladimir’s Seminary for their hospitality over the weekend, as well as the speakers for their edifying discourses. The HTOS seminarians greatly benefited from the opportunity to discuss prominent issues of the faith with their brothers from the other seminaries, and look forward to continued dialogue and cooperation in the future.