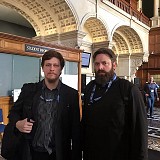 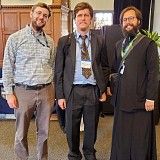 From August 19 to 24, 2019 many patristics scholars from around the world gathered at the University of Oxford (Oxford, UK) for the 18 th International Conference on Patristic Studies. Created in 1951, this conference meets every four years and assembles hundreds of scholars from Europe, North America, Australia, Russia and other countries who present papers and communications on various aspects of the study of the Fathers of the Church. This year, aside from a few plenary papers, the conference featured more than five hundred scholarly communications and more than three hundred workshop papers. The conference traditionally includes many Orthodox participants, including the faculty members of Orthodox seminaries.

This year, two faculty members of Holy Trinity Orthodox Seminary presented papers at the Oxford Patristics Conference. Dr Vitaly Permiakov, Associate Professor of Dogmatic and Liturgical Theology, Director of the M.Div. Program, presented a paper entitled “Temple, Cross, Jerusalem: an Old Georgian Homily on the Dedication of Holy Anastasis, Attributed to St John of Damascus.” Dr Permiakov’s paper represents part of his current project which seeks to assemble, translate, and study extant patristic homilies on the dedication of churches, as well as on the ancient Jerusalem feast of the Dedication of Holy Anastasis (Holy Sepulcher) on September 13. In his paper, Dr Permiakov tried to demonstrate that even though this homily, attributed to St John of Damascus (d. c. 750), survived only in the Old Georgian language, it reflects a lost Greek original, and quite possibly was pronounced in the late seventh century on
this feast in the city of Jerusalem. Aside from its interesting use of Scripture and liturgical allusions, the homily reflects the ecclesiological thought of the Church of Jerusalem right on the cusp of the Islamic conquest of Palestine.

The new Seminary faculty member, Rev. Demetrios Harper, Ph.D., Assistant Professor of Church History, participated in the workshop “Exploring Nuances in St. Maximos the Confessor’s Thought,” which sought to revisit and explore some of the disputed or more complex aspects of the celebrated Byzantine monk’s corpus. Fr. Demetrios’s paper, entitled “Self-determination and the Question of Subjectivity: Moral Selfhood in St. Maximus the Confessor,” examined the anthropological suppositions that underlie St. Maximus’ approach to the concept of moral self-determination or autexousion. Although autexousion is sometimes translated as “autonomy,” many contemporary scholars have argued persuasively that the philosophers and theologians of the pre-Renaissance world who employ the term do not have the same anthropological presuppositions that inform the contemporary understanding of the concept. Rather, the notion of an autonomous “self” arises in the wake of the Enlightenment and especially Kantian approaches to moral psychology. Post-enlightenment autonomy is dependent in turn upon the invention of “subjectivity,” an inwardly-directed view of selfhood that many would argue is inaugurated by René Descartes’s formulation of the Cartesian “ego.” Conversely, the diverse philosophical approaches in the pre-Renaissance world possess a common notion of selfhood, regarding an individual not as a distinct subject or “I” but rather as an “objective participant” in a larger human community.

Fr. Demetrios’s paper observed that while this scholarly analysis appears to stand on firm ground in relation to pagan sources, it largely ignores the Christian tradition and especially influential Greek Patristic authors like St. Maximus. The Confessor’s views of autexousion and his description of the ideal state of the self—both in the present life and in the deified community of the age to come—indeed fulfill the criteria for categorization as “objective participant.” However, as Fr. Demetrios argued, St. Maximus’ articulation of the post-lapsarian state of the self and a fallen state of self-determination is strongly reminiscent of the Cartesian approach to humanity and the consequent autonomous self of post-Enlightenment thought. Consequently, the texts of the Confessor demonstrate a “subjective” approach to selfhood that predates René Descartes by several centuries, but which regards this state of subjectivity as being one that is the result of the Fall and exists in opposition to the Creator’s intentions for mankind.

Fr. Demetrios’s presentation reflected his ongoing research for a larger project on self- determination and selfhood in the Byzantine Christian tradition, which he commenced as the 2018-19 Byzantine Studies Fellow at the University of Notre Dame’s Medieval Institute.

In addition to presenting their aforementioned papers, Fr. Demetrios Harper and Dr. Permiakov attended many other papers and lectures, engaging with a wide variety of patristics scholars and thinkers from around the world.