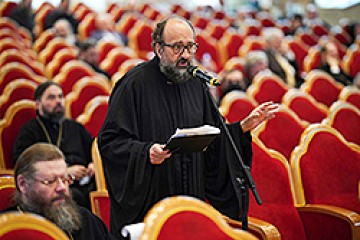 The Inter-Conciliar Assembly is divided into commissions that prepare draft guidelines concerning the life of the Russian Orthodox Church (ROC). The documents enter into force after being ratified by Councils of Bishops of the ROC. Plenary sessions of the Inter-Conciliar Assembly are chaired by His Holiness Patriarch Kirill of Moscow and All Russia, and bring together the members of all the various commissions. At the most recent plenary session, four documents were considered, in the following order: 1) “Regulations on Canonical Penalties and Disciplinary Measures for Clergymen”; 2) “On the Integrity of Human Life from the Moment of Conception”; 3) “On Blessing Orthodox Christians for Military Service”; and 4) “On Secular Employment for Clergy”.

The first two documents were drafted by the ICA Commission on Church Law, chaired by His Eminence Metropolitan Mark of Berlin and Germany. Beside Vladyka Mark from the ROCOR Deacon Andrei Psarev (HTOS '95 and Professor of Canon Law and Russian Church History) and Rasaphor Nun Vassa (Larin) served on this commission. At the January 2020 plenum, the Regulations on Canonical Penalties were not heard in full because of the length of the document. Since the chairman of the commission, for good reasons, was not able to participate in the plenary session, the document was presented by his secretary, Archpriest Dr. Alexander Zadornov (Associate Professor and Head of the Department of Practical Church Disciplines at the Moscow Theological Academy). On May 27, after many additions and amendments, the draft version was adopted at the plenary session of the ICA. The value of the document lies in the fact that it establishes a norm concerning canonical punishments for clergy living amid the conditions of contemporary reality and thereby shields them from possible arbitrary interpretations of church canons.

The next document under consideration was prepared by a commission on theology and theological education, which also includes Deacon Andrei, Professor of Russian Church History and Canon Law at Holy Trinity Orthodox Seminary in Jordanville. The document was presented by the chair of the commission, His Eminence Metropolitan Hilarion (Alfeev) of Volokolamsk. The document is the Church’s response to the deeply critical situation in the Russian Federation, which is sadly the world leader in terms of the number of abortions.

The third document, which was considered on the second day of meetings, May 27, concerns the blessing of soldiers for military service. This document was also drafted by the commission on church law. Its main message was that the blessing is conferred upon an Orthodox Christian, rather than upon a weapon in and of itself. The text of the document was not unanimously accepted during the following day’s voting.

On the last day of the ICA’s plenary session, a document on the types of professional activity compatible with ordained ministry was considered. This document was drafted by the Commission on Church Governance and presented by the chairman of the Commission, His Eminence Metropolitan Varsonofii of Saint Petersburg and Ladoga. The regulation in question reminds diocesan bishops and parishes of the need to care for the material security of their clergy. The document takes into consideration the experience of pastoral care in non-Orthodox countries. If approved by the Council of Bishops in November 2021, it will be applied in practice in the Russian Orthodox Church Outside of Russia.

Throughout all three intensive days of the ICA’s work, the discussions were moderated by His Holiness Patriarch Kirill of Moscow and All Russia. In addition to the unique experience of working with the Primate of the Russian Church, it was an inspiring experience of conciliarity, with decisions during discussions being made on the basis of what is expedient for the Church rather than of the status of the speaker. During all of the discussions, His Holiness Patriarch Kirill emphasized that the documents of the ICA apply not just to the Church within the Russian Federation, but to the entire fullness of the Russian Church across 16 countries.

Courtesy of the official ROCOR site