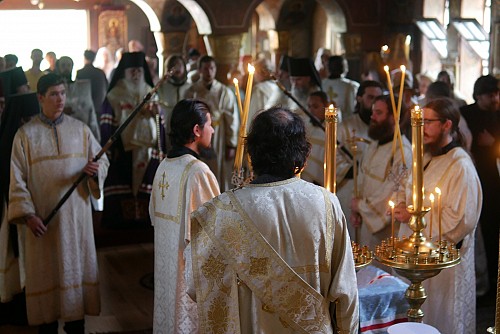 On Sunday 9/22 May, Metropolitan Hilarion was laid to rest at Holy Trinity Monastery.

The newly reposed Metropolitan Hilarion began his spiritual life in our Holy Trinity Monastery.  After successfully completing his studies in the Holy Trinity Orthodox Seminary, Igor Alexeivich Kapral was tonsured the Monk Hilarion and rapidly was ordained to be a hieromonk.  Until he was chosen to be Bishop of Manhattan in 1984, he began his pastoral life in the monastery while performing many different obediences.  The monastery being the spiritual center of the Russian Orthodox Church Abroad, he quickly became well known by our pilgrims as a spiritual leader, exhibiting the important monastic and pastoral virtues of deep humility, simplicity and love.  It was extremely rare that Fr Hilarion was seen to be angry or depressed.  He exhibited spiritual joy and was very attentive to the needs of all with whom he crossed paths.

With all of his qualities, it was decided by our bishops that he was needed to be a vicar, as Bishop of Manhattan, to Metropolitan Philaret (+1985) of blessed memory.  Eventually, in 1996 he was sent to Australia as ruling bishop of that diocese.  There also, the faithful came to love their archpastor for his pastoral care of them.

Upon the death of Metropoliltan Laurus, Vladyka Hilarion was elected the new First Hierarch of the Church Abroad.  He distinguished himself for his missionary zeal and for his peace-making.  The fact that now the Church has so many missionary parishes is due in large part of Vladyka Hilarion.

For about four years, Vladyka suffered from a form of blood cancer.  However, throughout this time, he continued his usual pastoral labors up until recently.  When asked how he felt, he always stated that he was feeling much better.  Our Lord Jesus Christ took our dear Vladyka to His heavenly habitation on May 16.  It was decided by the Synod of Bishops that he would be buried in his “alma mater.”  So after a funeral in the Synodal cathedral of Our Lady of the Sign in New York City, the earthly remains of Metropolitan Hilarion were brought to the monastery on Saturday evening, May 21.

Many pilgrims arrived to attend the Vigil service and to bid farewell to their beloved spiritual father.  Also arriving for the burial services were several of our bishops, including Metropolitan Mark of Berlin and Germany, the deputy First Hierarch of our Church, as well as Bishop Gideon from Ukraine, representing Metropolitan Onuphry, the primate of the Ukrainian Orthodox Church, a close personal friend of Vladyka Hilarion.

After the Vigil service, a supper was served for the bishops and clergy attending.  Many spoke of remembrances of our newly reposed primate.

On Sunday, May 22, when the Church commemorates the Translation of the Relics of St. Nicholas, Divine Liturgy was served by eight bishops as well as many priests and deacons from all over the Church Abroad.

Hundreds of the faithful attended the liturgy as well as the burial.  Actually, even more people attended the burial, coming from neighboring parishes in multitudes.  From commentaries, it may be said that everyone present had been personally touched by Vladyka Hilarion is some way.

The day before, Michael Baleka from the Image -Not -Made -By -Hand parish in London, Ontario was ordained a deacon by Bishop Luke as per the request of His Eminence, Archbishop Gabriel.Today, Fr. Michael was ordained to the priesthood to assist the parish rector, Archpriest Vladimir Morin. May God help him in serving the Church.

A bountiful lunch was served for all present after liturgy.  This would have been very pleasing to Vladyka.

A short break for rest ensued after lunch.  At 3 PM, a pannikhida was served by the bishops and a great number of priests and deacons.  Before the start, Bishop Gideon read a letter of condolence from His Beatitude, Metropolitan Onuphy of Kiev and Ukraine.  After the chanting of “With the saints,…” His Eminence, Archbishop Gabriel gave a sermon in memorian of Vladyka Hilarion.  At one time, Vladyka Gabriel had been cell attendant to the late Metropolitan and therefore was well acquainted with him.

Due to the rainy weather, it was decided to finish the rite of the monastic burial in the cathedral after serving a litya.  This followed a long time of the faithful giving the last kiss of farewell.  Eventually the rain let up, and the burial followed, as in all the services, accompanied by the singing of Paschal hymns.  This to be sure was not incidental.  Despite our deep sorrow with parting with our beloved archpastor, everyone commented that there was felt a joy only felt on Pascha.  Vladyka himself exhibited this joy in his daily life.

After the burial, behind the monastery cathedral, a buffet style meal was served for all present.  This gave all the opportunity to greet friends who had not seen each other in a long while, all brough together by Vladyka’s repose.

Now the monastery has returned to its usual life, having experience a very unique and spiritually uplifting event, which although was occasioned by a sad event, nevertheless showed us how a righteous person is laid to rest, to be with His Saviour, whom the newly reposed Metropolitan Hilarion loved with all of his being, and to Whom he always directed his path.

More photos and videos from the weekend and be found on the Holy Trinity Monastery website.