Holy Trinity Seminary holds Commencement Exercises for the Class of 2021 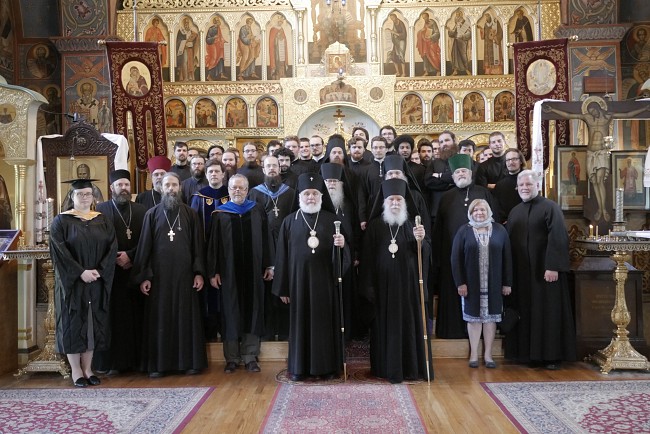 On June 6, the Sunday of the Blind Man, commencement was held to mark the conclusion of Holy Trinity Seminary’s 73rd academic year.

His Eminence, Archbishop Gabriel of Montreal and Canada traveled to Jordanville to preside at the divine services at Holy Trinity Monastery, together with His Grace, Bishop Luke of Syracuse, Abbot of the monastery, Rector of the seminary and HTS alumnus, class of ‘78. Vladyka Gabriel serves as the senior hierarch on the seminary’s board of trustees, and is himself an alumnus of HTS, class of ‘84. His Eminence served at the All-Night Vigil on Saturday evening, June 5, and at the Hierarchical Divine Liturgy on Sunday, together with Vladyka Luke. The responses were sung by the seminary-monastery combined choir under the direction of Deacon Nicholas Kotar, HTS Director of Choral Programs and Instructor in Applied Music and Liturgics.

During the Sixth Hour, Bishop Luke tonsured second year M.Div. student, Peter James, a Reader. After the consecration, Bishop Luke ordained Monk-Subdeacon Theodore (Stanway), graduating M.Div. student class of 2021 and member of the monastery brotherhood, a hierodeacon. At the conclusion of the liturgy, with the blessing of His Holiness, Kyrill, Patriarch of Moscow and all Russia, Archbishop Gabriel presented Protodeacon Victor Lochmatow (HTS class ’67) with the patriarchal award of the Order of St. Seraphim of Sarov (2nd class) in recognition of his forty-five years of diaconal service (which was marked in December, 2019), his many years of tireless work and devotion to the monastery, and his role in the seminary as Associate Professor of Russian Literature and Church Slavonic.

Commencement ceremonies began just before 2:00 pm with a procession of the seminary faculty, the trustees and student body from the monastery building to the cathedral for a Moleben of Thanksgiving. At the conclusion of the moleben, the hierarchs, choir, faculty, administration, alumni, and the current student body processed to a large outdoor tent on the lawn in front of the seminary building, wherein the commencement exercises took place this year.

The ceremony began with the singing of Christ is Risen, followed by the U.S. National Anthem and God Save the Tsar. His Grace, Bishop Luke, seminary rector, welcomed all in attendance. Following this were edifying commencement remarks given in tandem by the seminary dean, Dr. Nicolas Schidlovsky and the seminary rector, Bishop Luke, which were entitled; “Remembering Our Roots --- St. Job and the Pochaev Lavra”. Both His Grace and our dean spoke of the importance of everyone learning more about the incredible life and legacy of St. Job, Abbot and Wonderworker of Pochaev. All in attendance were challenged to learn more about why he, in particular, was chosen as the patron saint of Holy Trinity Monastery’s brotherhood and its’ press, and how the good works he did during his long (100 years of) life are as pertinent in today’s world and today’s Church, as they were during the time in which he lived, from the mid sixteenth to the mid seventeenth centuries.

The rector and the dean then conferred degrees on the following candidates. Receiving the Bachelor of Theology (B.Th.) were Ivan Gryaznov, Reader Evan Nalitov, and Reader Seraphim Reimer.

Next up on the program, Archpriest Victor Boldewskul, rector of Holy Epiphany Parish in Boston, MA, Deputy Director of the HTS Alumni Assn., member of the seminary board of trustees, and HTS alumnus class of ’91, presented the awards for academic achievement and diligence to seven of the underclassmen. This was followed by a collegial address, given by our M.Div. graduates; Reader Seth Davidenko (speaking in Russian) and Hierodeacon Theodore (speaking in English).

Fr Victor Boldewskul then returned to the podium to deliver remarks on behalf of Mitred Archpriest Stefan Pavlenko, Director of the HTS Alumni Assn. Fr Victor stated to the new graduates that they are part of a brotherhood that has served the Church in various ways throughout the world for almost 3/4 of a century, and he encouraged them to remember what the fathers taught them, and encouraged the underclassmen to finish their studies.

Closing remarks were then delivered by Archbishop Gabriel, who acknowledged the significance and incredible importance of the seminary to the Church throughout its’ almost 75 year history (to be marked in 2023). His Eminence noted that HTS has produced deacons, priests, and bishops, as well as lay leaders such as churchwardens/parish starostas, choir directors, and teachers, and closed by echoing words spoken earlier, inspiring the graduates to use their time wisely.

The rector, dean, faculty and administration extend congratulations to all of our newest graduates, and hope for each of you fruitful service in the months and years ahead to His Holy Church.

Axios to Protodeacon Victor, to the newly-ordained Hierodeacon Theodore (Stanway) and the newly-tonsured Reader Peter James! May the Good Lord grant Fr Victor, his wife Elena and to Reader Peter, his wife Lucina and daughter Sophia, health, good success in all things, and to Fr Theodore, strength to continue in his monastic obedience, and to all, may He grant salvation!